We released a new version of the Ecoengine. We now serve the complete data of the Wieslander Vegetation Type Mapping Project (VTM) including vegetation features and plot data.

There are a few potentially breaking changes. Most significantly, we moved to secured internet connections (SSL). Your application might break if it cannot handle redirected responses. Please use https instead of http in your requests.

For additional changes see our changelog.

If you are using the Ecoengine through rOpenSci, you need to update this package to the newest version on CRAN.

The ecoengine API is now available for use in R through the rOpenSci ecoengine package. rOpenSci allows access to data repositories through the R statistical programming environment that is already a familiar part of the workflow of many scientists. The project’s Karthik Ram has developed the package that allows users to work with the Ecoengine API directly through the R terminal, tapping into an extensive array of tools that can be used to better understand the information being served.

Using the package in R, you can now easily:

Checkout Karthik’s Introduction to the ecoengine package for a great tutorial on how to install and use this awesome tool.

Our team was excited to present our work for the Berkeley Institute of Data Science. The presentation was split into a several different sections, and you can view the entire feed or select the links below to jump directly to a particular topic. 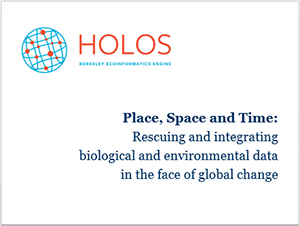 Place, Space and Time: Rescuing and integrating biological and environmental data in the face of global change

We’ve put together a few simple visualization applications using D3.js that draw data from the Ecoengine API which you can now see in our examples page. In just a few hours time, we were able to develop dynamic charts that can easily be adapted and extended upon using the open source code.

First, we have created a simple line chart that plots the output of the climate sensors acquiring data from two of UC’s field stations. The chart gets data from the Sensors database, and lays out an svg line chart using sample code from the D3 examples gallery as a starting point, and also borrows from some code that enables the tooltip on mouseover. The data can also be dynamically aggregated through a selection of Hours, Days, Weeks, Months, or Years which is handled in the API with the Pandas Analysis Library. 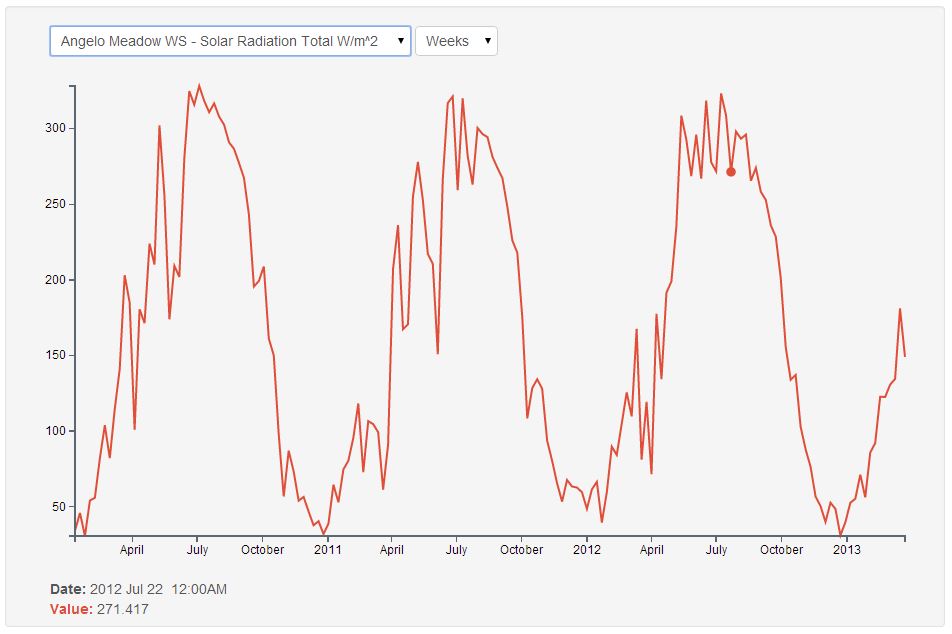 Second, we have created a tool that plots data from the UC Field Station’s species checklists into a taxonomic tree, also using D3 sample code as a starting point. 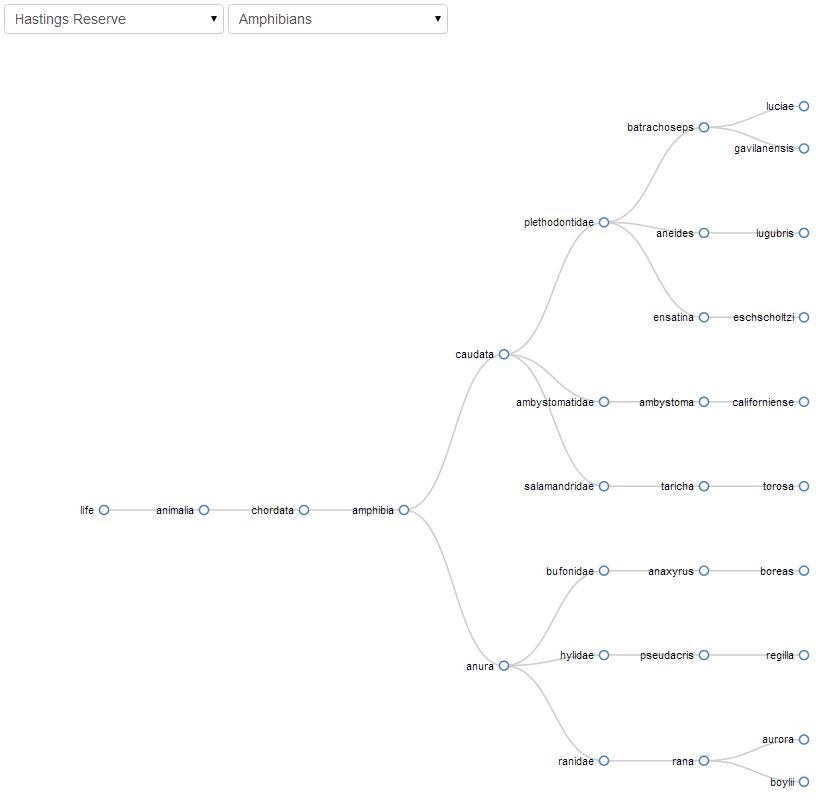 We are thrilled to release an early version of the Berkeley Ecoinformatics Engine API!  We have a lot of data and tools that we’ll be pushing out in future releases so keep an eye out as we are just getting started.

To introduce eco-minded developers to this new resource, we are serving up two key data sets that will be available for this weekend’s EcoHackSF:

For this hackathon, we are encouraging participants to help us document our changing environment.  Here’s the abstract:

During the 1920's and 30's Albert Everett Wieslander and his team at USGS compiled an amazing and comprehensive dataset known as the Wieslander Vegetation Mapping Project. The data collected includes landscape photos, species inventories, plot maps, and vegetation maps covering most of California. Several teams have been digitizing this valuable historic data over the last ten years, and much of it is now complete. We will be hosting all of the finalized data in our Berkeley Ecoinformatics Engine.

Our task for the EcoHack community will be to develop a web/mobile application that will allow people to view and find the hundreds of now-geotagged landscape photos, and reshoot the same scene today. These before and after images will provide scientists and enthusiasts with an invaluable view of how these landscapes have changed over the last century.


Though this site is focused on the development of the EcoEngine, this project is a part of a larger effort to address the challenge of identifying the interactions and feedbacks between different species and their environment. It will promote the type of multi-disciplinary building that will lead to breakthroughs in our understanding of the biotic input and response to global change. The EcoEngine will serve to unite previously disconnected perspectives from paleo-ecologists, population biologists, and ecologists and make possible the testing of predictive models of global change, a critical advance in making the science more rigorous.  Visit globalchange.berkeley.edu to learn more.